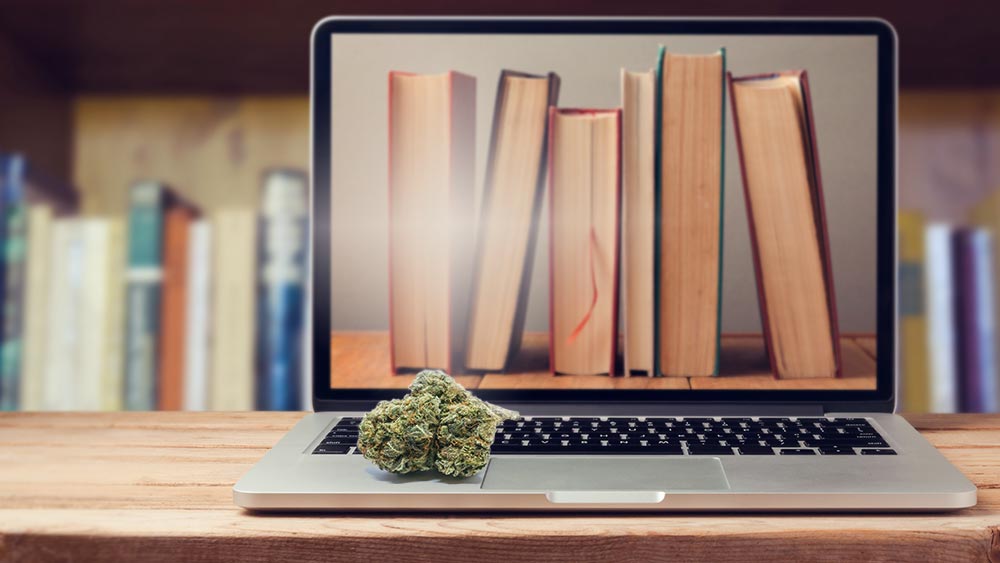 “We affirm you, method! We don’t forget that yesterday you glorified each one of our ages. We have faith in the poison. We know how to give our whole lives every day. Behold the time of the Assassins.” (Arthur Rimbaud, Morning of Drunkenness)

We deliberately left out a major “classics” literary figure from our first account of cannabis and literature – Arthur Rimbaud, because his whole being was prophetically announcing the 20th-century atmosphere.

Also, his Illuminations foresaw a new relation between literature and drugs.

20th-century writers who acknowledged Rimboud’s legacy likewise affirmed cannabis and other drugs as a “method,” a key to opening the doors of perception and liberating the spirit from the narrow laws of reality.

“Behold the time of Assassins” rings true in so many ways, from envisaging the horrors of world wars to modernist artists who embrace “poison” to make sense of existence.

“Behold the time of Assassins” could also be an appropriate phrase to describe the life of an influential 20th-century philosopher, cultural critic, and essayist.

His writing career began and ended in the darkest period of human history, enclaved by WWI trumpets and the birth of Nazi Germany. In 1940, he took a lethal dose of morphine at the French–Spanish border while trying to escape the invading Nazi troops.

This great experimenter is an important bridge between the 19th-century hashish literature and 20th-century practice of using drugs as a working method.

Namely, he often stated that Baudelaire’s “Artificial Paradises” were perfect descriptions of “magnificent constructions of light, glorious and splendid visions, cascades of liquid gold,” but that they ought to be repeated independently, this time with philosophical rigor.

He never did write such a methodological study, but has left plenty of relevant writing material that was gathered and published posthumously under the title On Hashish. It’s mostly based on hashish-related experiments that took place between 1927-1934, under the supervision and guidance of psychopathologists Ernst Joël and Fritz Fränkel.

Benjamin’s personal quest behind spiritual explorations was the search for a mystical language that would somehow capture the unknown.

But, as with Baudelaire, this remains an elusive ideal:

“We stretch out our arms full of love, eager to embrace what we have in mind. Scarcely have we touched it, however, then it disillusions us completely. The object of our attention suddenly fades at the touch of language.”

However, again inviting Baudelaire’s spirit, there remains a seductive depiction of arcadian reality, that, at times, sounds like a luring invitation:

“And when I recall this state, I would like to believe that hashish persuades Nature to permit us – for less egoistic purposes – that squandering of our own existence that we know in love. For if, as we know in love, our existence runs through Nature’s fingers like golden coins she cannot hold and lets fall so that they can purchase new birth, she now throws us, without hoping or expecting anything, in ample handfuls towards existence.”

In American literary history, writers from The Beat Generation are probably the most famous descendants of the 19th century’s hashishins.

Names such as William Burroughs, Allen Ginsberg, and Jack Kerouac redefined the boundaries of the modernist literature, and, more notably, created a climate that would eventually form the counterculture movements (with hippies being the most prominent among them).

Their core values included spiritual, cultural, and sexual liberation, pacifism, the spread of ecological consciousness, criticism towards the capitalistic bureaucracy, and decriminalization of cannabis and other drugs.

In practice, this system of thoughts was often realized through provocative literary pieces, usually followed by trials for obscenity, promiscuous and homosexual sex life, and, naturally, a lot of experimenting with various drugs.

As a lot of them were atheists (or inclined towards Eastern religions), the goal of their encounter with cannabis was often not to “break on through on the other side,” but to stay here and perceive the reality as it is, without the culture’s contaminations.

The author of The Naked Lunch (1959) defines marijuana as one of the hallucinogens – it’s “a drug that expands consciousness and increases awareness of surroundings and bodily processes.” (Points Of Distinction Between Sedative And Consciousness – expanding Drugs)

As such, Burroughs explained, it is very useful to the artist to activate “trains of association that would otherwise be inaccessible.” Admittedly, he owed many scenes of The Naked Lunch to cannabis.

What’s more, he noted, this hallucinogen is “a guide to psychic areas which can then be reentered without it.”

According to his own experience, one can stop using cannabis and reach the same perception paths that he activated with chemical means. Identical effects can be achieved with light, music, and “especially by training myself to think in association blocks instead of words”.

In a word, he summed it up, “it would seem to me that cannabis and the other hallucinogens provide the key to the creative process and that a systematic study of these drugs would open the way to non-chemical methods of expanding consciousness.”

Likewise, Burroughs’ fellow writer and the author of Howl (1955) talked about the “natural” deepening of perception. Ginsberg was particularly interested in heightened awareness of artistic nuances:

“I apprehended the structure of certain pieces of jazz & classical music in a new manner under the influence of marijuana, and these apprehensions have remained valid in years of normal consciousness. I first discovered how to see Klee’s Magic Squares as the painter intended them (as optically three-dimensional space structures) while high on marijuana.” (The Great Marijuana Hoax: First Manifesto to End the Bringdown)

Ginsberg goes on to note that “most of the major (best and most famous, too) poets, painters, musicians, cineasts, sculptors, actors, singers & publishers in America and England have been smoking marijuana for years and years.”

Interestingly, he analyzed the political and social implication of prohibition, offering provocative conclusions:

“When the citizens of this country see that such an old-time, taken-for-granted, flag-waving, reactionary truism of police, press, and law as the “reefer menace” is in fact a creepy hoax, a scarecrow, what will they begin to think of the whole of taken-for-granted public REALITY?

What of other issues filled with the same threatening hysteria? The specter of Communism? Respect for the police and courts? Respect for the Treasury Department? If marijuana is a hoax, what is Money? What is the War in Vietnam? What are the Mass Media?”

In other words, the spirit of marijuana is once more fused with revolutionary lights.

Meanwhile, on the old continent, Henri Michaux was creating idiosyncratic poetry, esoteric novels, and beautiful paintings – while experimenting with mescaline, LSD, and hashish.

His Miserable Miracle (1956) represents one of the great explorations of the inner self under the influence of mescaline and hashish. At the same time, it’s an incredibly funny birds-eye view on everything that emerges in the mind during this spiritual journey.

In his writing, hashish materializes almost as a person who blesses its host with wisdom, but also behaves rather capriciously at times, producing random illusions with no other goal but to prank.

The biggest surprise about hashish is that “you can make it work,” Michaux noted; “he” gladly accepts the factuality of the problem and will provide you with answers. You have to be careful, though – sometimes his solution will ridicule both yourself and your “problem.”

Other miracles include hyperfocus, stereovision, producing a state of weightlessness, enhanced empathy, and many more.

All in all, hashish for Michaux was a magician full of surprises, who keeps his hat of tricks at about “five to six centimeters deep into the skull”, in a cerebral spot that “lives only then” and that “never lived before” taking hashish.

Cannabis Opening the Doors of Perception

The story about literature and cannabis in the 20the century is virtually an infinite one.

After all, as Ginsberg said, everyone was taking it.

Not everyone became Ginsberg, though. But the list of those using it is impressive. Besides the writers we mentioned here, many more admitted to using cannabis in the creative process: Stephen King, Carl Sagan, Hunter S. Thompson – to mention a few of the well-known.

It was a true “morning of drunkenness”, during which poets affirmed “poison” as a method and tried to capture the higher reality by “derangement of the senses” (Rimbaud again).

In a word, “the time of the Assassins.”