Those were the words of Henry Bemis, the main character in the iconic Twilight Zone episode, “Time Enough at Last”.

In the story, Henry simply wanted the time to read. He had a nine-to-five at a local bank that took up the bulk of his day, and when he finally returned home at the end of his shift, his wife chastised him for wanting to settle down with a book in his remaining few hours.

He needed to find a quiet place to do so.

Henry decides to sneak down to the bank vault to get in a quick bit of reading on his lunch break. But when he returns, he finds that the entire world has disappeared: no people, no animals, and no sign of life whatsoever.

The other day, when I finally visited my office for the first time in months, I felt just like Henry…

The lights were off. It was so quiet that I could hear the floorboard creak under every step I took. I sneezed — due to all of the dust that has been collecting — and it actually echoed through the hallway. Mice scratched inside the walls. The plants were dead.

Lonely offices like mine have been rotting away for the last few months as all but “essential” workers have been quarantined. We’ve been Zooming, Skyping, and Slacking our workdays away at home and the end result is — it actually works.

That could spell the death of the office as we know it.

Let’s start with the sector that has the most to lose: office real estate investment trusts, or REITs. A REIT is basically a landlord that owns multiple properties that they rent to businesses. They also typically pay a very generous dividend, which is the reason REITs have always been attractive for income investors.

But REITs that focus their business on office space will be in for a very rude awakening if people don’t start going back to those offices and if businesses find it too risky to sign leases for them.

If trends continue the way they are, these kinds of stocks could be in trouble…

Office leases or sales were already significantly lower this year compared to this time last year, and that wasn’t just due to the obvious coronavirus effect. It’s because large office spaces simply aren’t necessary.

Telecommuting has been rising for decades and the virus has simply shone a light on how effectively it can be done.

In fact, a recent study that measured badge-in data, Wi-Fi patterns, and security cameras found that many large office buildings were empty over 50% of the time!

Why would any business owner pay to maintain a building that is half-full?

The offices that are leased will likely have to reconfigure spaces to allow new distancing requirements — which will be capital-intensive and end up wasting even more of their space. Those extra expenditures will almost certainly cut the already trimmed dividends further, making office REITs less attractive.

My bet is that we see more and more businesses go in another direction.

Now, while working at home is certainly a trend that will continue to grow, I’m sure that we are all too aware that everyone needs to get out and have a socialized work experience. Half of the reason I went into my empty office was the hope that one or two coworkers would be as stir crazy as I was.

You’ll Never Be On The Inside!

So join Outsider Club today for FREE. You’ll learn how to take control of your finances, manage your own investments, and beat “the system” on your own terms. Become a member today, and get our latest free report: “Level Up: eSports Investment 101”

After getting your report, you’ll begin receiving the Outsider Club e-Letter, delivered to your inbox daily.

Research has shown time and time again that we all need that balance to perform the most effectively. “Similar to the general notion regarding the appropriate dosage for medication, finding the right amount of time to telecommute may be the key to producing desired outcomes,” according to a review published by the Association for Psychological Science.

But after spending the last few months trapped in isolation, you don’t need a research study to tell you that it’s nice to see other people.

We need human interaction, and there is one area of the market that will soak up all of the empty office blues…

I’m talking about “mixed-use” facilities. I’m sure you’ve seen them or even used them. They are non-centralized office spaces that provide everything an office would — internet access, desks, supplies, a coffee shop — without the overhead of a business having to foot the entire bill to pay for employee space even when they aren’t there. 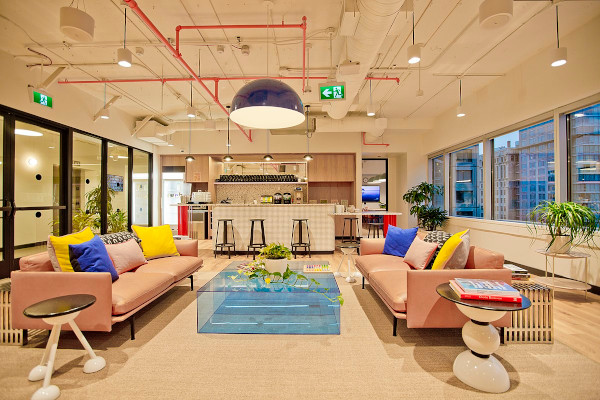 The mixed-use industry was already projected to quadruple in value by 2027, and the coronavirus should only accelerate that over the long haul. The immediate issue will be which companies can actually survive the next few months of empty offices.

WeWork is the most public example of a mixed-use real estate company that has been hit hard by the current crisis. WeWork was worth $47 billion a year ago but has been whittled down to a meager $2.9 billion valuation.

It lost $2.2 billion last year before the lockdown and this year hasn’t been any kinder.

Those fiscal beatings are why I’m looking for companies that can withstand the current conditions and soak up any additional real estate from the ones that go under.

My best bet is International Workplace Group (IWG.L, OTC: IWGFF), the world’s largest provider of flexible workspace. It currently owns 3,300 locations in 1,200 cities across the globe.

What sets it apart is how conservatively it has allocated its resources. It has over $90 million in the bank and very little debt, making it a good bet to get through the pain now and grow robustly once things return to “normal”.

The stock dropped up to 75% by mid-March, but has already started to crawl back. It currently looks like a long-term “blood in the streets” play.

For better or worse — depending on your appetite for social interaction —  work life simply will not be the same. We may look back on movies like Office Space or television shows like the Office with fond nostalgia one day, the same way we look at movie theatres since the birth of streaming services.

They’re a treat every once in a while, but now there is just a similar, cheaper, and more effective way to get the job done.

Look into the future, and invest accordingly.

Jimmy is a managing editor for Outsider Club and the investment director of the personal finance advisory, The Crow’s Nest, and cannabis stocks advisory, The Marijuana Manifesto. For more on Jimmy, check out his editor’s page.

The post The Death of the Office – Outsider Club appeared first on CBD Oil Headlines.