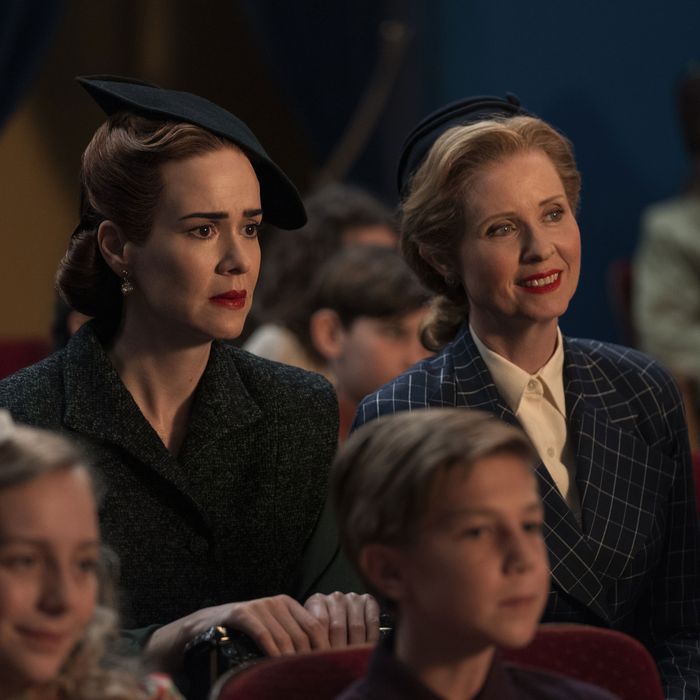 Got No Strings
Season 1

An episode of a Ryan Murphy show that introduces puppetry as a concept feels more likely to end with people being tortured with twine than any other show. Surprisingly, and maybe disappointingly, “Got No Strings” doesn’t go for the grotesque, using the puppet show concept as a way to fill in the holes in Mildred Ratched’s back story, revealing the torture and abuse she suffered with her foster brother, Edmund Tolleson. Logic is completely out the window this episode in terms of plotting—Briggs recovers from a gunshot wound in about 10 hours—but it’s better than the last chapter simply because it feels like the title character is finally really being explored, three-quarters into the season.

“Got No Strings” picks up immediately after the end of “The Dance” with dogs hunting escaped fugitive and mass murderer Edmund Tolleson and his nurse/girlfriend Dolly through the fields. The pair strip to throw off the scent, and find a deserted house, where she seems almost ready to settle down. She wants to have sex, but he’s more nervous about what happens next. She’s acting arguably crazier than him and finds a gun that anyone who’s ever seen a TV show or movie knows is going to get her in trouble. There’s some truly inane chatter between these two unlikable characters that’s just not campy or fun enough, and then they have sex in a barn like fugitive couples are required to do when they’re on the run. He also discovers that Dolly is more willing to kill a chicken than he first suspected. She’s a keeper.

Back in Lucia, Briggs is clinging to life. Could this be the creation of the monster that the ads for Ratched have promised? A woman turned monstrous when her attempt to save her brother cost her the love of her life? Ryan Murphy and his team don’t allow this possibility to linger very long before basically having Briggs recover like nothing ever happened. In the time it takes Edmund and Dolly to have sex and choke a chicken, Briggs is back to normal and talking about going to a puppet show. Ratched is nervous, mentioning that she grew up in a house with a puppet theater in the basement. Fun!

In one of the campiest “that doesn’t happen” twists of the season, Ratched and Briggs end up at a marionette show in Modesto in what seems like less than 24 hours after Briggs was shot. Yes, one could argue that part of the charm of the Murphy-verse is that logic isn’t a primary concern, but the problem with this show is that the illogical beats aren’t replaced often enough by campy, fun ones. And so the emotions of the show start to feel inconsistent and amplified. Briggs and Ratched fall in love so quickly that it doesn’t make sense, and then nearly break up when Ratched doesn’t want to go to a puppet show.

On to the show itself, which is really just a way to tell viewers the Ratched backstory without resorting to a simple flashback. The host is somewhat disconcerting in an American Horror Story: Freak Show kind of way, saying things like “When you see something sad, cry. When you see something funny, laugh.” There’s some interesting subtext that’s been woefully unexplored in that Ratched can sometimes seem like a people-pleaser, someone following simple puppet-show cues to make other people happy or to get what she wants.

Ratched has a mental break, seeing the puppet show as a window to her past. A brother and sister lost their mommy and daddy and went on a great adventure. Multiple sets of foster parents beat the children, who were sent from house to house over the years like mere puppets in a broken system. And then they got to a wealthy house, where everything seemed great, but it was the worst of all. Perverts and pedophiles paid to watch the brother and sister, Mildred and Edmund, perform sex acts on each other. And, one night, the boy took scissors and stabbed the abusive monsters who created him. Of course, none of that was really in the show. Sarah Paulson is great in the next scene, explaining what we just saw in the show to Briggs, but it’s oddly repetitive of what we just learned.

Back on the lam, the cops have surrounded our version of Bonnie and Clyde. Edmund goes out to turn himself in, and then Dolly comes out shooting with the gun she found in the house, which allows the creators of Ratched to essentially recreate the end of Bonnie and Clyde, riddling Nurse Dolly with bullets like she’s Faye Dunaway in the classic Arthur Penn movie. And then they drag Edmund right back to Lucia. Harold and Dolly are dead and he’s right back where he started, only he has a stronger set of shackles and even a muzzle this time. (Would he really go back to an active crime scene? Never mind.)

Dr. Hanover and Nurse Ratched try to sell the Governor on the idea that Hanover’s hypnotherapy treatment of Charlotte Wells should be the lynchpin of his campaign, and not the fracas with Edmund. He’s not having any of it. The whole meeting goes very poorly, and the Governor forces Hanover to sign the paperwork to state that Edmund is fit for trial. The Governor reveals to Briggs that he’s going to withdraw funding for the hospital anyway, and then he fires Briggs. With two episodes to go, how can Ratched save her brother and the hospital?

• Why hire Rosanna Arquette, a great actress, to play the case worker for young Edmund and Mildred, and then give her no lines? Unless we’re going to have another flashback, that feels like a waste of talent.

• Dolly mentions Jane Russell by name and the imagery of her outfit and the hay in the barn are clearly meant to recall Howard Hughes’s great The Outlaw from 1943.

• Two episodes left and the body count has been rising steadily, with at least one major death per episode—Charles, Harold, Dolly in the last three. Who do you think is next?

• Does it feel to anyone else like we’re still in the prologue of this story? There are only two episodes left, but Ryan Murphy has a habit of using a first season to really be a set-up for the next—he did that with The Politician—instead of a standalone story. How much do you think will be wrapped up this year and how much is just prep work for a likely season two?

Keep up with all the drama of your favorite shows!


By submitting your email, you agree to our Terms and Privacy Notice and to receive email correspondence from us.