KUNR radio reports on the state’s new compliance board which hopes to be a far more transparent and effective set up than what the the state was previously operating.

Click the image to go to their swanky new site 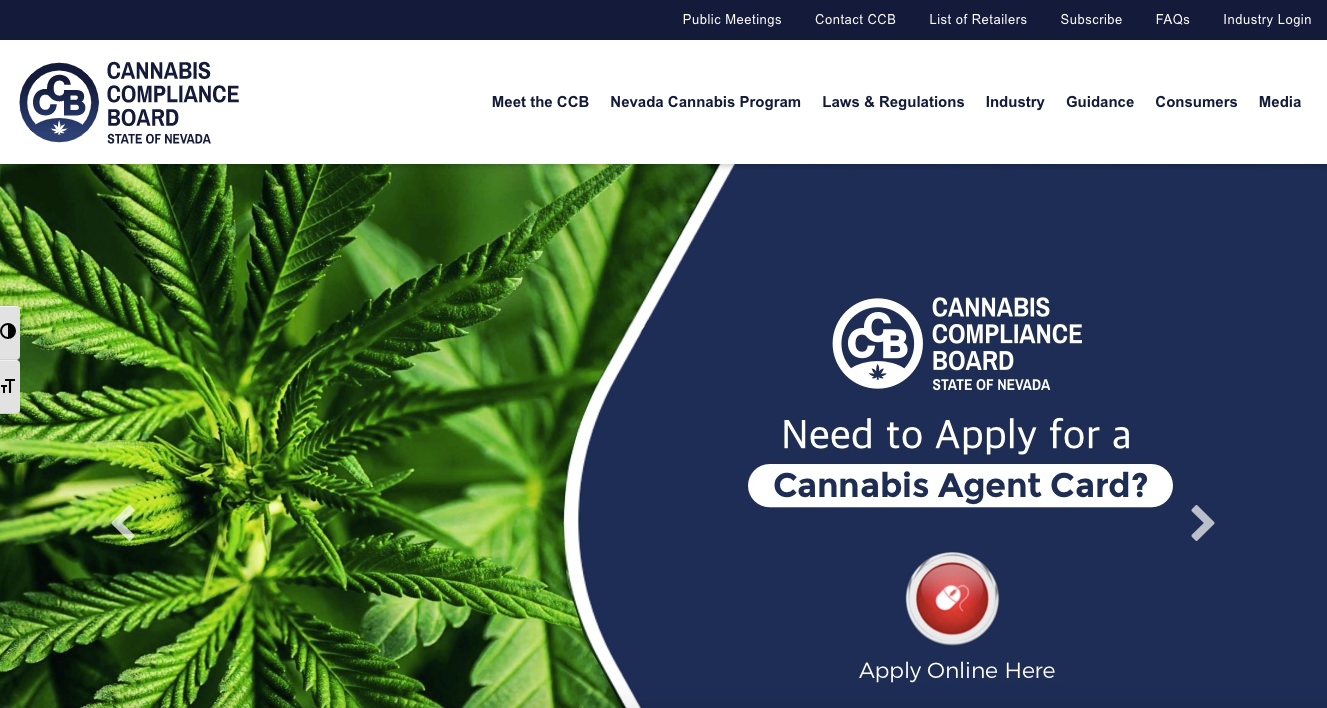 Starting this month, Nevada’s new Cannabis Compliance Board will take over regulatory authority of the state’s growing marijuana industry from the Department of Taxation. Originally proposed by Gov. Steve Sisolak last year, the new agency is now tasked, in part, with inspecting cultivation facilities, testing cannabis products and determining who can grow and sell cannabis in the state. KUNR’s Paul Boger spoke with Tyler Klimas, executive director of the board, to better understand what that transition means for Nevada.

Boger: [Wednesday, July 1] marks the first official day that the board has full oversight of Nevada’s pot industry. I was wondering if you could tell me a little bit about the process that, that transition of regulatory authority from the Department of Taxation over to the board?

Klimas: We had partial authorization starting January 1. So it’s been a six-month ramp-up to full authorization. We have done a lot of reorganization, recognizing [what] the strengths and weaknesses of the past marijuana enforcement division were, making the necessary changes. Also, per the legislation, we have staffed up. So we’ve increased our staffing and really kind of just laying that groundwork, right? The foundation for the cannabis compliance to take over oversight responsibilities of the cannabis industry.

Boger: When Gov. Sisolak first floated the idea for the creation of the compliance board, he said he wanted it to be very similar to the [Nevada] Gaming Control Board. Is that what we’re seeing here? Has that come to fruition?

Klimas: Obviously the Gaming Control Board is the gold standard in the world, and the Cannabis Compliance Board was created and modeled somewhat after the Gaming Control Board. I feel we’re very blessed and lucky to have what I call the “X-factor” as far as other cannabis oversight bodies and other states, we have that kind of expertise in our backyard. So, yeah, you see a lot of similarities when with the Cannabis Compliance Board and the Gaming Control Board. We’re not the same, [though]. I’ve got health inspectors on staff that go into facilities, right? We’re very product centric. And so there’s a lot of differences, but that kind of model is important. We’ve already drawn a lot of inspiration, and we’ll continue to draw that kind of inspiration from the game control board.

Boger: Out of pure curiosity, who now has oversight over the tax money generated from the sale of marijuana?

However, through [the COVID-19 pandemic], I like to get a good insight into the numbers, and I get those sent to me on a weekly basis to see those year over year sales numbers. And obviously March held pretty true. Most of the directive [didn’t go into effect] until the end of March. Obviously in April, we saw a big drop-off in both sales and transactions. It’s been interesting to watch since then, as we’ve slowly opened back up with delivery, curbside-only, our transactions have remained a lot lower year over year, but sales we’re seeing creeping back up. People are obviously buying a little bit more than they used to.

Now in June, I think the last numbers I saw … and not to get into specifics because that is the Department of Taxation’s role to release those, but from what I can see, and what we can look into, sales are starting to match if not exceed what they were year over year last month. Again, transactions down a little bit. That’s not to say this industry took a big beating. They did, every industry, the entire state did obviously, and it’s been very difficult for a lot of the facilities, including cultivation facilities, right? So there’s that ripple effect through the industry, but hopefully, we start to get back to some semblance of normal. Our role as the Cannabis Compliance Board is to make sure we can do whatever we can within the regulations to help the industry get back to normal.

Boger: There’s been some criticism over the past couple of years, about the transparency within the licensing process here in the state. As a matter of fact, litigation over problems with the 2018 round of licensing is still ongoing. What can the compliance board do to limit those issues in the future?