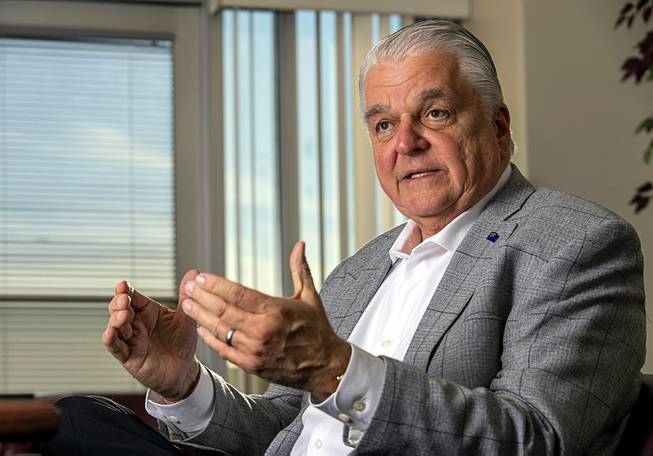 Nevada Governor Steve Sisolak responds to a question during an interview at his office in the Grant Sawyer State Office Building Thursday, Dec. 5, 2019.

“Today is an historic day for those who were convicted of what has long been considered a trivial crime, and is now legal under Nevada law,” said Gov. Steve Sisolak, who proposed the pardon resolution.

Prior to January 1, 2017, the possession of an ounce or less of marijuana was a criminal act that could be charged as a misdemeanor, gross misdemeanor, or felony, depending on additional factors. Recreational marijuana has since been legal in Nevada.

The resolution extends to people previously convicted of possession of an ounce or less of marijuana, including those those convicted multiple times. It does not include other drug offenses.

“This resolution aims to correct that and fully restore any rights lost as a result of these convictions,” Sisolak said.

Nevada Attorney General Aaaron Ford said he was proud to help “make it easier for these Nevadans to get jobs, housing and financial aid for college. Together, we’re making criminal justice reform a priority across Nevada.”

Today’s action does not include records sealing, which is outside the scope of the…