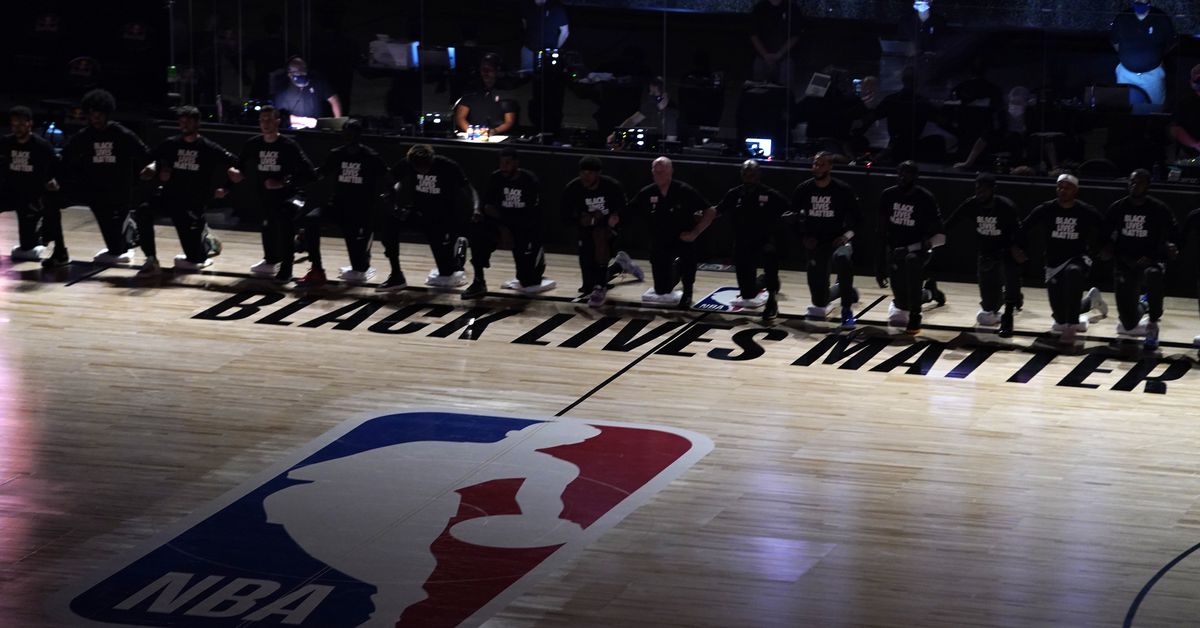 Hello Shakers and other NBA fans.

It’s wonderful to address you with actual NBA games on the books! It’s great to have basketball back, and while it’s not what we would all want, it’s far from bad.

I might even go so far to say, it is good. The NBA enjoys the reputation, among those who follow this sort of thing, for thoughtful, meticulous attention to detail, cutting edge presentation, and frankly, great showmanship.* The MLB may evoke nostalgia, and the NFL the bombast of a gladiator fight in imperial Rome, but the NBA always feels like The Future. The Future in a world that is bigger than the USA.

The NBA clearly thought a great deal about how the games would look and feel in the bubble. They thought about sight lines, cameras, camera angles, sound, atmosphere, production and overall presentation. Nothing about the NBA game presentation in the bubble looks ramshackle, or (sadly?), temporary.

Many other sports that restarted in empty venues (save rugby in New Zealand, which you probably ought to at least check out on ESPN) seemed to share an approach of “How do we make this the least bad it can be?” (That’s perhaps too kind, some (cough EPL) seemed to say “How do we just get this on the air again?”) The NBA took a different tack.

The NBA went past “make this passable” and seemed to ask: “What could be GOOD about games in a bubble with no fans?” What could make for a fun experience with the tools on hand, knowing that every game will be in the same spot, every day, and the whole environment is in play?

There was worry that the game would look bad with empty seats, and empty gym. Not so. The space is visually “crammed” and there basically aren’t any voids visible. They turned a socially-distanced bench into a vertical layer cake that fills the space up from the court. They also brought in those bizarre sports sideline chairs from the English Premiere League, and that’s good? Not entirely clear what pleather chairs that seem to swallow whoever sits in them, even NBA players, add. They’re big, though, and they raise the eye level. That said, the idea of the three tier bank of seats for players, coaches and staves is excellent.

The cameras are out of hand, in the best possible sense, even if a track camera nearly murdered Socially Acceptable Harden, I mean, Luka Doncic. The production teams don’t have it all worked out quite yet. The camera that works like you’re sitting courtside should perhaps move on its track less, and swivel more, as if you were sitting midcourt, one row up in an NBA arena.

The first scrimmages were interesting. The very first one utilized the underfloor microphones a lot for maximum Sneaker Squeakage. Also, the Clippers choice of one radio play-by-play guy was…thankfully unique. The poor guy talked, and talked. He talked a lot, to fill all possible pauses, which must have been exhausting. I learned that Lou “Lemon Pepper Stripper Wings to Endanger the Whole Bubble Are So Awesome” Williams is “The Underground Goat”. The image of a tunneling goat is better than Lou Williams will ever be, frankly. I also learned that Rodney McGruder is “The Scavenger”. He’s clearly collecting discarded fouls that other players didn’t use, so he can deploy the surplus later.

The broadcasts evolved from there. The Lakers first scrimmage showed everyone why LAC may live in the same building, but the full LA Experience belongs to the Lakers. Probably forever. Their whole team was present, with graphics, interview pieces, puff pieces, and more. They were ready. There was pure Laker glitz and not a subsurface goat in sight.

Slowly the production teams have figured out that a little less sneaker squeak and moderate levels of fake crowd buzz works best. The games started to feel, if not proper NBA, at least good to watch, especially being able to hear the players talk, the refs address the scorers, and player complaints, and cheers for teammates. (Does “Tap to Cheer” work? I’d love to know.)

And then it happened.

The Virtual Fans appeared. The surprise package no one wanted. They’re in a fake, (gray not team color), version of The Ugly Chairs from EPL, even. The big screens were pretty interesting with team video running on them, before. This thing, the Virtual Fan, with its janky laptop cameras, stuttering lag from participants, forever being behind the play, isn’t…good. It even gets sadder when you see that while Phoenix wasn’t filling their arena, they can’t even fill a few dozen virtual seats, either.

Rockets, take note. Let TDS on Virtual Fan. We will show up. If we show up here to comment on scrimmages, we will definitely bring our janky cameras, our lag, our snark, out for real Rockets games.

NBA, you’re doing so much right, but please, dial back the Virtual Fan. Everything else is just peachy, just let the games happen in the real 2K arena you made. It is working.

I predict that it’ll all be dialed in by the playoffs, that it’ll be a form that sometimes, when your team is playing in an empty Atlanta/Charlotte/Phoenix arena, you might even want back for a game or two.

Think about how many NBA players are 25 or younger. There may be players who always have watched a huge banquet of NBA games since they were kids.